Great float on opportunities ahead

The successful heavy lift operations with MV Hawk and MV Osprey have opened a new market for FFS in Farsund. 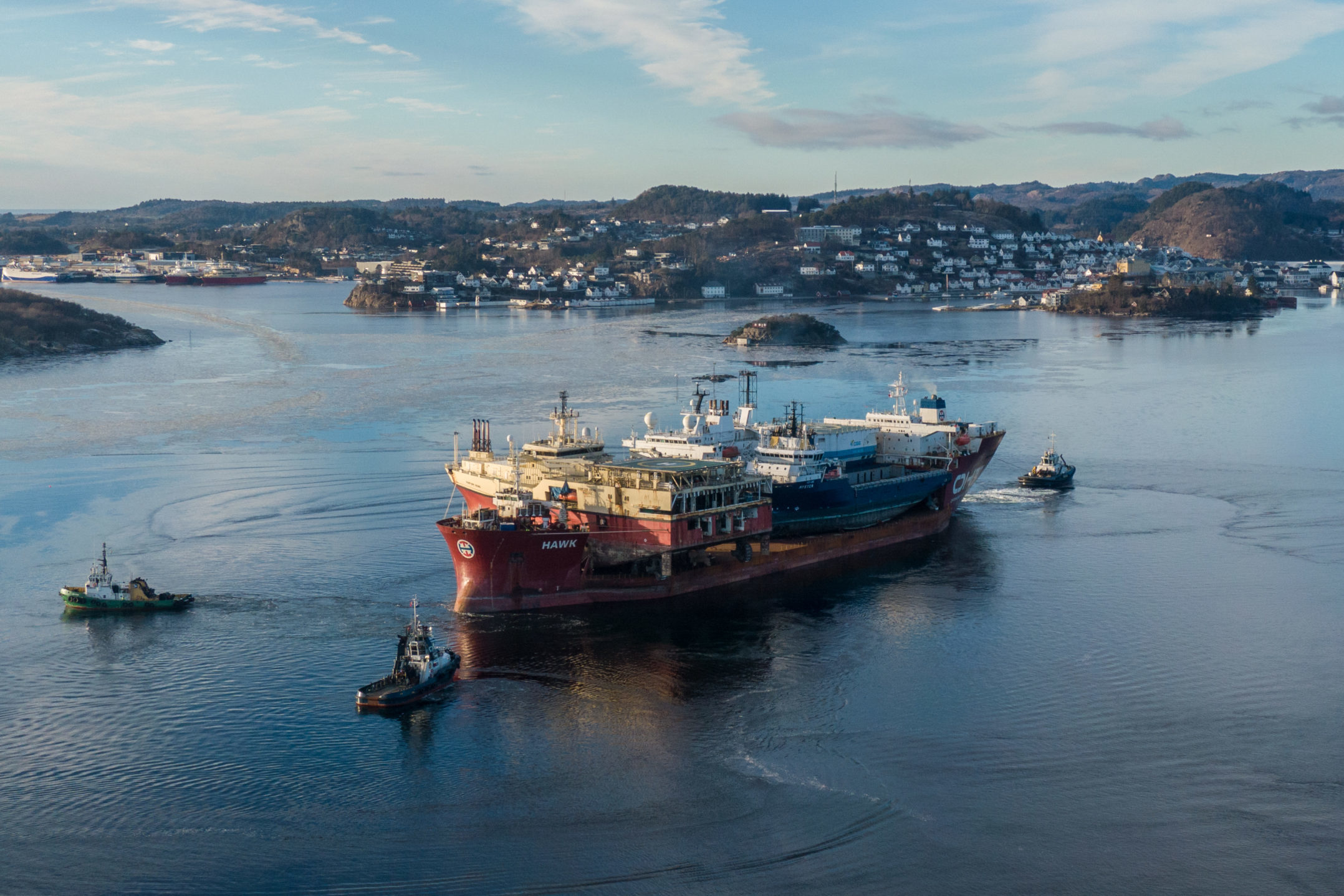 MV Hawk is fully loaded and towed out of Farsund.

- The removal of the reef Håøyflua has been crucial. Now we can take large ships in through the strait. There is no doubt that we are very well positioned to get similar assignments. Spindsfjorden is now considered the best float on location in all of Norway, says John W. Nilsen, general manager of FFS.

For over a month before and after Christmas, there was hectic activity inside the island of Langøy. Three ships that were to be transported to Turkey were in turn loaded on board the waiting heavy-lift vessel MV Hawk, which is owned by the Norwegian shipping company Offshore Heavy Transport (OHT).

NEVER HAVE IT such a large maritime operation has been carried out in Farsund municipality.

- We had information that one of the seismic boats that were in storage in Farsund needed transportation to Turkey, and knew that a couple of other boats were going the same way. We put the owners of the vessels in connection with OHT, so that they could explore the possibility of a freight agreement, Nilsen says.

FFS towed the supply boat Stril Myster from Stavanger and the seismic vessel CGG Alize from Bømlo. The seismic vessel that was already in Farsund, Ramform Viking, was simultaneously rigged for transport south.

FFS HAD the responsibility for preparing the deck on board the MV Hawk.

The foundations on which the load was to stand were made of steel. The job was performed by welders from FFS and Einar Øgrey Farsund, as well as the ship's own welders.

- It was an extensive work. We had ten welders on 24-hour operation for 14 days, says Nilsen.

MV Hawk also brought with her a large tank from another job. This had to be dismantled and stored temporarily.

DURING THE preparation work, there were challenges with a ballast pump and a pipe.

- We mobilized divers, who helped solve the problem, Nilsen says.

Local carpenters were also in action to build supports for the ship's bottom on the boats. Eventually, the vessels were moved on board one by one and temporarily secured.

On 31 January, MV Hawk was able to leave Farsund with a load that measured 87 meters in width.

- ALL IN ALL WAS This is a very successful project, which I both hope and believe we will get more of. This type of project requires a lot of planning and a good collaboration with the Norwegian Coastal Administration and the local port authority, says Nilsen.

He estimates that the Hawk project with provisions, fresh water, diving services, purchase of tools and other deliveries generated a total of around NOK 15 million in local turnover.

LAST AUTUMN a similar float-on operation was carried out. FFS pirated the barge Bibbi Challenge, before it was towed out to Spindsfjorden and maneuvered on board the heavy lift vessel MV Osprey.

- Next time, there may be elements for offshore wind turbines that are loaded in Spindsfjorden. We see a nascent market in this particular sector, says Nilsen.